Why Earth Has Never Been Visited

Have alien intelligences from other parts of the universe visited the earth? This page is an attempt to rationally look at the issue of UFO’s and extraterrestrials. Within the last few years, scientists have gained considerable knowledge about the universe so that the question of extraterrestrial visitations can be addressed from a scientific, rational perspective.

Aliens visiting from elsewhere in the universe?

Have we been visited by extraterrestrial beings from elsewhere in the universe? First, I would like to eliminate the idea that we have been visited by beings located outside our own galaxy. Andromeda, the nearest galaxy to the Milky Way is 2 million light years distant. This means that if there were aliens in Andromeda, it would take them longer than 2 million years to come to earth.1 Another problem is why they would want to visit our galaxy. The Andromeda galaxy is considerably larger than our galaxy. If life were common in the universe, there should be many times more of it in Andromeda, than in our wimpy galaxy. Why would they even want to visit us? A third problem for potential aliens is detecting us. We have been sending radio waves for less than 100 years. It will be another 2 million years before those signals reach our closest neighboring galaxy. The light (and other electromagnetic signals) that they now see represent the way the earth looked 2 million years ago. Beings in other galaxies would have no way of knowing that advanced life forms existed in our galaxy.

SETI – aliens in our own galaxy?

How many alien civilizations in our galaxy?

The Drake Equation (named for Frank Drake, the originator of the equation) is a way to estimate how many intelligent extraterrestrial civilizations might inhabit our galaxy. Below is the Drake Equation:

These are the values based upon the most recent astronomical data:

A most optimistic estimate for the number of intelligent civilizations in our galaxy is 150. This would mean that each intelligent civilization would be separated by an average of 2,000 light years. Such vast distances make contact unlikely and finding other advanced civilizations improbable. If these civilizations exist, they will not detect our radio signals for another 1900 years. How will they even know we are here? For information on how these results were calculated, see the appendix.

Fermi Paradox – Where are they?

Enrico Fermi, a prominent nuclear physicist of the last century, asked the question, “Where are they? Shouldn’t their presence be obvious?” Given at least 10 billion years for the existence of the Milky Way galaxy, one would think that intelligence would have developed before now – if life were common in the universe. Even at slow interstellar speeds, humans with advanced rocketry skills might be able to explore the galaxy in a few tens of million years. Some have suggested that aliens would choose not to reveal themselves to us. However, Frank Drake estimated that at least 10,000 advanced civilizations exist in the Milky Way. Carl Sagan raised the estimate to 1,000,000. Would all those civilizations stay at home or choose to conceal themselves from us? It seems highly unlikely. It would seem more likely that they do not exist.

Obviously, our current rocket technology is incapable of providing the speed needed to make interstellar travel realistic. Matter/anti-matter engines might provide the power to accelerate near the speed of light. However, there is no way to contain or generate large amounts of anti-matter. The only way that we have produced anti-matter is through extremely large (miles across) particle accelerators. However, the meager few anti-matter particles generated are rapidly destroyed through interactions with ordinary matter. Nuclear power would provide a long-lived fuel supply for interstellar travel. Even so, such fuel would last only tens of years before being spent. Fusion power is yet to be harnessed, but, likewise, fuel would eventually run out. According to Frank Drake, “To send a spacecraft the size of a small airliner at one-tenth the speed of light requires as much energy as the US now produces in more than a hundred years.”3 In fact, the minimum amount of fuel required for such a spacecraft is 100 tons (assuming that a fusion reactor converts mass into kinetic energy at 100% efficiency).4 This does not sound practical to me!

Assuming that fuel and propulsion problems could be eventually solved, there are other, more serious, problems to contend with. Traveling near the speed of light is no simple problem. Running into small particles (like the size of a grain of sand) would punch major holes in any spacecraft, due to the high speed of impact. According to Frank Drake, “At relativistic speeds, even a collision with a particle of a few grams results in something close in energy to a nuclear bomb blast. Not good news for the space travelers.”3 A major biological problem seldom mentioned in the press is the blue shifting of the light from ordinary stars when traveling near the speed of light. The Doppler effect of traveling at such speeds would blue shift ordinary visible light all the way to the wavelength of gamma and x-rays. Shielding gamma rays is next to impossible (they can even travel through many feet of solid metal). When they do strike matter (like space traveler’s bodies), the results are devastating. This problem alone might restrict the speed of space travel to a small fraction of the speed of light.

Other significant problems would be involved in trying to keep biological organisms alive for many years of space travel. The lack of gravity would likely be fatal within a couple years (determined from the effects of prolonged weightlessness among the astronauts of the Space Station). Generating gravity would be possible through spinning, but might severely restrict the design of propulsion systems. In addition, it would be impossible to carry enough food and water for such a trip. Two solutions are possible – though not within the technology that we currently possess. One solution is to recycle all carbon and water. This process would have to involve capturing all biological waste (and dead bodies) and converting it back into food and water (doesn’t sound appetizing, does it?). The idea of making a self-contained bio-habitat is appealing, but impractical, due to the large amount of space required. A recent attempt to do this on earth was a miserable failure, since the designers failed to provide enough space to support all members of the small crew. A second possible solution to the food problem would be to put the travelers into suspended animation. Currently, we have no idea how to do this, and it does not seem possible to do so.

What about all the sightings, Roswell, abductions, etc.

UFO believers would ask about Roswell, UFO sightings and alien abductions. The problem I have with the whole Roswell/government conspiracy thing is that there is not one piece of physical evidence. The government has never been able to keep any kinds of secrets – much less over a period of 40 years. Regarding abductions, none of the people involved have been shown to have any signs of tampering, which would be readily apparent by MRI.

PBS has a good series on why scientists are skeptical about UFOs and abductions. See the comments of

This paper has shown that the probability of aliens visiting the earth is virtually zero. Potential aliens in other galaxies are too far away to detect our presence (since radio signals will not reach them for millions of years) and the travel times make intergalactic travel impractical. Recent scientific studies demonstrate that the universe is much less hospitable to life than it would seem from our unique Solar System and planet. A large proportion of our galaxy is uninhabitable. Parts of it would not even be expected to produce rocky planets. The highly unlikely collision that produced our large moon prevented the earth from being a waterworld.5 It also ejected the majority of our primordial atmosphere, which prevented the earth from going through a runaway greenhouse effect similar to what happened to Venus, our sister planet. Finally, our Solar System is unique in that it has large gas giants located only in the outer regions. Other systems discovered have gas giants located either near their star or in both inner and outer regions of their planetary system. The presence of gas giants near the star would eject any rocky planets from orbit. The presence of gas giants in the outer region of planetary systems is absolutely necessary for the survival of advanced life forms. Without Jupiter, the number of catastrophic collisions that the earth would experience would be at least 10,000 times greater. So instead of suffering massive species extinction events every 100 million years, the earth would experience these events every 10,000 years.6 Only bacteria and other simple life forms would be able to survive this kind of bombardment – no advanced life could ever form in the vast majority of planetary systems. These problems indicate that there would be no more than 150 advanced civilizations within our galaxy – and, more likely, we are completely alone in our galaxy.

Interstellar space travel is much more difficult than indicated in movies and television series, such as Star Trek and Star Wars and the like. First, it is not possible to travel at speeds greater than the speed of light – the physics of the universe prevent it. Second, traveling near the speed of light is impractical for biological organisms. Collisions with particles even the size of a grain of sand would be catastrophic. An even worse problem is that the light from ordinary stars would be blue-shifted all the way to the gamma end of the spectrum when traveling near the speed of light. These gamma rays would destroy all biological life – even if it were in suspended animation (if that were possible). In essence, these problems would restrict the speed of travel to well below the speed of light. The most optimistic estimate for the presence of extraterrestrial civilizations would put them 2000 light years apart. With no intermediate habitable stopping points, space travel over this distance would be impractical. So, even if we are not alone in this galaxy, it would be highly unlikely that any extraterrestrial civilization could have visited us. What about all the “evidence” for extraterrestrials and UFOs? See the links below for more information. 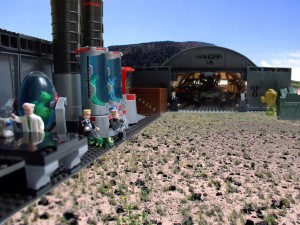 Actual photo of aliens at Area 51

Rare Earth: Why Complex Life is Uncommon in the Universe by Peter D. Ward and Donald Brownlee

A recent (2000) secular book that recognizes the improbable design of the earth. Paleontologist Peter D. Ward and astrobiologist Donald Brownlee examine the unusual characteristics of our galaxy, solar system, star, and Earth and conclude that ET may have no home to go to.

Appendix – how the results were calculated