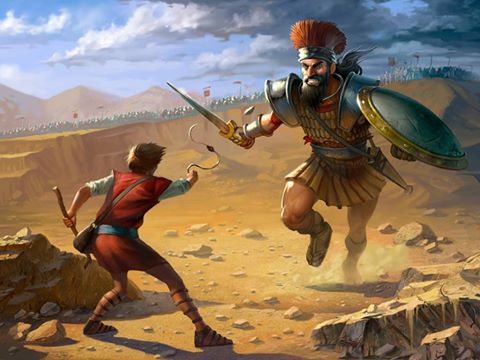 “I can do all things through Christ which strengtheneth me.” Philippians 4:13

1 Samuel 17:2, “And Saul and the men of Israel were gathered together, and pitched by the valley of Elah, and set the battle in array against the Philistines.” What does, “set the battle in array” mean? You’ll like this. It means they had their fighting cloths on. They are ready, set and they are just waiting for the captain of the army to say…GO!

Goliath was a man that stood 9’6″. Now that is one big dude! Goliath was a warrior and he filled his enemies with fear. The Bible records that King Saul and his men were “greatly afraid”. Another verse in 1 Samuel 17 says that King Souls men were, “sore afraid.” This is one challenge that surely David would have categorize has gigantic! Heck, I’m reading about it 3,000 years later and I’m afraid for David…I can see the giant task before him. I can see how impossible it must of looked for this boy to go against this giant.

While the army of King Saul was terrified of this giant this teenage shepherd boy took him on! Everyone must have thought David had lost his mind. David was confident as he shouted, “for who is this uncircumcised Philistine, that he should defy the armies of the living God?” Now, I just got tingles down my spine…I like David! But then David’s older brother, Eliab rose up in anger against his little brother for being so bold against this man. David was at the battle field that day because his dad, Jesse had sent him with some groceries so his brother’s could eat lunch and now he is slinging insults at the “champion of the opposing army!”

And David said to Saul, “Let no man’s heart fail because of him; thy servant will go and fight with this Philistine.” King Saul answered, “Dude, David, I like you, you make a killer sandwich and that harp music…wow…but you are just a kid and this man has been a warrior every since he was a kid. You cannot fight this man you are not able.”

David said to the king (make no mistake, king Saul was still the king and he had the power to kill you…so the Bible says that David rehearsed exactly what he would say to King Saul), “I’m not just a great harp player…I killed a lion and a bear when they came after my keepers sheep and now this Philistine will be among them because he has defied the armies of the Lord.” The young shepherd continued, “the Lord delivered me from the paw of the lion and the paw of the bear and he will deliver me from the hand of this Philistine.”

I don’t know if King Saul recognized the strength of heart in David or if the Lord spoke to him and said, “Hey, let the kid go…” As a dad, with a grown daughter (Michaela Smith) and three grown boys (Mikey Goodwin, Zach Roth and Nicholas Airrington, I can tell you it is difficult to let them go…and let them be them selves and grow up. You want to coddle and protect them…but all you can do is pray for them and love them with all your heart.)

The king fitted David with his helmet and his armor. And David said, “Dude, king, I can’t wear this stuff, it’s just going to slow me down.” The tension built as David chose 5 smooth stones from the creak nearby and he approach the Philistine! Goliath made fun of David because he was a youth and he was “ruddy”, as Goliath put it. The giant cussed at David. Usually, when people swear it shows you how stupid they are with a weak vocabulary.

And the Philistine said to David, “Come to me, and I will give thy flesh unto the fowls of the air, and to the beasts of the field.”

Then David answered the giant from Goth, “Thou comest to me with a sword, and with a spear, and with a shield: but I come to thee in the name of the Lord of hosts, the God of the armies of Israel, whom thou hast defied.” David had no need to bring a bunch things into battle with him. Because our Lord God was with him.

David said in defiance to the giant before, “Today is not your day. I’m going to kill you…cut your head off and feed your stinking carcass to the birds and the beasts. And when I am done with you all the earth will know that there is a God in Israel! The Lord does not save with sword and spear, but this battle belongs to the LORD!”

The Philistine ran toward David and David toward him and David drew a stone from his bag and slung it and nail that big dude right in the forehead! David ran up…uh oh David had no sword. Then he saw the giants sword laying on the ground. David must have struggled as he lifted this huge hunk of metal above his head and with one whack…David cut the head of the man Goth.

As David stood on top of the giant the Philistine saw that their champion was dead. It was their turn to be afraid and they turned and ran! Not so fast you dogs of war. The men of Israel and the men of Judah was in hot pursuit as they tore off after the Philistine army through the desert. They corned them in a valley and the greatly crippled that army. While the men are going through their spoils of war…David took the head of the giant from Goth into Israel.

David faced the giant before him. And he was victorious because he had been faithful.

Just like David, as Christians with the faith in God that could slew a lion, a bear and even a GIANT we will be ready and we will shout with a shout, “My God is an AWESOME God!” We will shake our fists at the the challenge before us and say, “How dare you come at me and defy my God. I will face you traight away because this battle, the battle today belongs to the Lord! It is not my own. I will stand and attack and not run…because the Lord goes before me.” Because of your faith you will meet life’s challenges and arise VICTORIOUSLY!