Presenting Eric Barger & Take A Stand! Ministries
“We exist to see the Lost Saved and the Church Changed by the Power of Jesus Christ!” 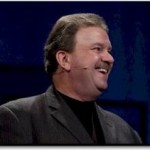 After spending two decades immersed in the world as a record producer, rock musician, drug addict, and New Ager, Eric Barger (pronounced Bar-jer) is now widely recognized in the area of Christian Apologetics and Discernment Ministry. Eric’s Take A Stand! Ministries confronts both the culture and the Church, focusing on the Cults, World Religions, the Occult, Spiritual Warfare, and, most particularly, the troubling unbiblical trends and doctrinal issues facing Christians in these end days.

He is the author of numerous books, including the best-seller From Rock to Rock, Entertaining Spirits Unaware: The End-Time Occult Invasion (with co-author David Benoit) and Disarming the Powers of Darkness. Eric has written for USA Today and has been interviewed by hundreds of print and electronic media outlets, including Time Magazine and Fox News. His articles are now syndicated on dozens of biblically-based prophetic and apologetics websites and blogs.

With Evangelicals continuing to steadily slide into doctrinal chaos, Eric Barger is a voice of biblically-based reason — and warning. Besides refuting unscriptural ecumenism, universalism, the normalization of Islam and Mormonism, and popular yet problematic fads such as the novel, The Shack, one recent focus of Eric and Take A Stand! has been an understandable expose’ and dialog concerning the heretical Emergent Church movement.  His messages on this topic have become the most requested live seminars and video teachings Take A Stand! has ever produced.

Without a doubt, Eric Barger is one of my favorite Christian apologetics.  I have met Eric several times…he is a genuine Christian whose only mission is to get the truth into the hands of the believers.  I would invite you to visit his website for more information and to order more material.  We will try and make some of his material available her at Airrington Ministries soon.

Be sure and visit the schedule on his site to see when he is coming to your hometown or better yet, invite him to your Church.