For God so loved the world, that He gave His only begotten Son, whosoever believeth in Him shall not perish but have everlasting life. 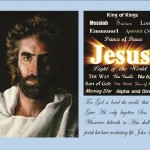 , while it it is one of the most quoted scriptures  should have more meaning in our lives than in does.  I think perhaps that we learn it in Sunday school we tend to forget it by the time we reach adulthood.

The fact is God did love us so much that He did sent His only Son to die…not just any death…but a horrific death for you and I.  Listen to me…if you were the only one…Jesus would have came here to die just for you.  Think about that for just a minute.  Think about that while you are lying in bed next to your girlfriend recovering from your weekend drunk as you reach for your bong to try and and recover from the pain in your head.

Or maybe you are not one of these guys that drinks…but you like to work 80 hours a week and then come home and yell at your kids and slap your wife around.  Whatever your hang up is…if you do not have a personal relationship with the man who chose to go to the cross 2000 years ago…then you have a destiny and that destiny is a devil’s Hell.

Now, I know you don’t like that very much, but it is the truth.  So, pull your head out of your back orifice and get your life straight!   Think about what you are doing to those around you that love you.  Think about what you are doing to Christ who loved you so much He went to Hell and back just so you wouldn’t have to….now that’s love.  Think about the physical torment and suffering He went through so you would never have to suffer for eternity…now that’s love.

And if you think for a minute that Jesus is a figment of my imagination.  Then you better think again friend.  The historical and physical evidence for Jesus Christ overwhelming.  For example, did you know that thousands of people witnessed a physical Jesus ascend into Heaven?   Did you know, despite countless people over thousands of years attempting to prove Christianity wrong and the Bible wrong…that Christianity is the only religion to be proven right?

You say you don’t know.   You say, brother Kevin I don’t want to be religious.  I would say, friend, I don’t want to be religious either and I would never ask you to be.  You say, brother Kevin, what will my friends think of me?  I would say friend, you get one shot at this and then the judgement…where will your so-called friends be when you stand before a just God to give an account for your life?  You will be all alone…you can either stand there with Jesus by your side or you can stand there looking over your shoulder for these people you called friends.  You say, brother Kevin I like to drink and smoke weed.  I say, friend…there are no liqueur stores where you are going.  Get it right friend…get it right!

But brother Kevin there are so many hypocrites in Church.  I would say, friends…the hypocrites hope will perish…you be right and stop worrying about what your neighbor is doing…they will have a day of judgement just like you will.

Now, I have a question for you.  When will your excuses run out and will you finally admit you are lost and accept Christ as your personal friend and Savior?  He is waiting for you, you know?  “Behold I stand at the door and knock, if any man open the door I will come in and sup with him.” Revelation 3:20

You may be asking why I am being so harsh…it may sound kind of ironic…but it is because I love you and I don’t want you to spend eternity in Hell.  How long is eternity?  It’s forever and that is a long time my friend.  Life on this earth is short and all we get to show for it is a little itty bitty dash between two dates.  If you do know Jesus, what in the world are you doing for Him?  He died for you.

If you don’t know Him, you can.  Just say this simple prayer, “Lord, I know that I am a sinner and I have broken your laws.  I repent of my sins.  Please forgive me so that I might go to live with you Heaven.  Please come into my life and help me to live a life free from sin for you.  Thank you Jesus for saving me.  Amen”  If you just prayed that prayer to God and meant it, I believe you are saved.  Now you need to read your Bible, pray every day and get to know Jesus.  Find a good Bible preaching church.  If I can help in any way…please contact me.

Think about how much God loved you…that He gave up His only Son, and watched Him being beat upon…spat up…beat so bad that His face was unrecognizable…whipped and nailed to a wooded cross.  Died…went to Hell and stole the keys to death and Hell…and He asks that you and I believe in Him…repent of our sins and invite Him into our lives and live for Him…now that’s love!