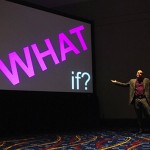 A skeptic asks: “Why should any one have to accept ancient hearsay as evidence for the existence of a god? If Jesus is who he said he was, then he shouldn’t have any problem personally convincing me of that fact, especially considering the penalty with which he is supposedly ready to zap anyone who doesn’t believe. In fact, I’d say, all things considered, he is a twisted monster for not doing just that.”

You are right to be suspicious about fallible people. But if God really is omnipotent, there is no reason why He cannot use fallible people to carry out His plans—including plans to reveal Himself and get it right.

God does not promise to prove Himself unequivocally to those who believe that He is a “twisted monster,” but to those who approach Him in humility. It may be a good idea to think about your own fallibility as a judge in these things.

The apostle Paul, writing to people in Rome, did not appeal to “ancient hearsay” at all, but to their own present experience. He pointed to their awareness of the fingerprints of the Creator in the grandeur of creation. He also pointed them to their need for salvation because they all fell short of the moral judgments they made of others. There (we) are all hypocrites, in need of mercy.

INFALLIBILITY – How can the Bible be infallible if it is written by fallible humans? Answer

How do we know the Bible is true? Answer

GOD’S EXISTENCE – If I can’t see God, how can I know he really exists? Answer

GOD’S ORIGIN – Who created God? If he made everything, who made him? Answer

CREATION STORY – Are there contradictions between the 1st and 2nd chapters of Genesis? What about other problems in Genesis? Answer

CHRIST’S RESURRECTION – “The Bible’s accounts of Christ’s resurrection are full of contradictions,” some claim. Is this true? Answer